We have found it to be inexpensive and easy to use—this makes it ideal for beginners.

Set a workout routine and train consistently with it to gradually move to more difficult balls. Your new killer reflex will translate to your boxing!

Find out More in Amazon

Prince Nazeem Hamed, Canelo Alvarez, and Mike Tyson—these past and current champions are particularly known in the ring for their reflexes that allow them to slip any incoming punches with ease.

A good reflex can be one of a fighter’s greatest asset, as not only will it allow you to slip punches, but also react quicker to find openings.

But here lies the problem: many of us believe that good reflexes is a “genetic” thing, so we’ve given up the hope of being that cool fighter that seamlessly dodges all the punches.

At least, I thought the same when I started boxing.

Growing up, I would play football (soccer, if you’re from the states) with the local kids from the neighborhood, but I would always be excluded from playing the goalkeeper, as I was deemed to be “too slow to react”.

This carried into my boxing as well—in the beginning, I would struggle in boxing sparring as I wasn’t able to dodge punches effectively and exploit openings due to my reflexes.

Even with my guards up, I would consistently take punishment especially from opponents with a greater reach advantage and result in me gassing out in the later rounds.

When I consulted my then coach about this, that’s when he introduced me to using a reflex ball.

Initially, I would struggle with maintaining the ball at bay, but training consistently with it, I came to see results from it. To my surprise, this translated into sparring as well—I’ve been able to slip through punches to counter attack on a more consistent basis even just after training several months with it.

Fast forward several years, I’ve used many reflex balls during my boxing training from many different brands, but one that stands out a lot is TEKXYZ’s reflex ball.

Before going into the reflex ball, we must answer this important question.

But why should I train with a reflex ball?

One obvious answer is training reflexes, but that’s just the tip of the iceberg. Here’s some other benefits you can expect from training with it:

Some of these benefits translate to better defense, such as improving balance and eliminating the flinch reflex. But above all, it helps a lot with your offense. For example, better hand-eye coordination and speed allows you to land more accurate shots to strike your opponents’ openings.

Now that you know why you should start using a reflex ball as part of your training, you would be wondering: which reflex ball should I get?

For a beginner, I would recommend the TEKXYZ for two reasons—it has assortment of kits that make it beginner friendly and it’s cheap.

When you open the box, it contains the following:

As you can see, the amount of things you get from this is quite generous. One thing that’s great is that because there are three different balls for different levels, it allows you to steadily improve your skills in handling it.

But how should I use it to get the most out of it, you might ask.

To truly understand this, I’ve decided to test the product in real life—but before doing this, let’s explore who this product is for.

Personally, I would recommend this product if:

However, I would NOT recommend it if:

Ultimately, a reflex ball is a training equipment and so it should be used as such. Reaping the benefits of a reflex ball requires practice, but you’d be quite surprised how much progress you can make in few weeks. So if you decide to get one, practice and keep going!

The main thing that stands out in this product are the three reflex balls included within: the novice ball, the veteran ball, and the boxer ball.

As the name suggests, the novice ball is the easiest ball to train with while the boxer ball is the hardest out of all three. The former is softer and uses a thinner elastic—that means the ball bounces back a lot more and so gives more time for you to react. The latter however is harder and uses a thicker elastic than the novice ball. That means you would have a shorter time to react to hitting back.

If you just started, it is necessary to set up the ball correctly. The steps to set it up for the first time is shown below:

To change between different balls, it is done with the following steps:

Once you have the ball set, you start by hitting the ball lightly without needing to fully extend your arm. You have to make sure the rhythm of hitting the ball is consistent and you hit the ball at the middle, flat surface of your knuckles to ensure the ball bounces right back to you.

My first impression of using it, I’ve immediately noticed that the headband fits comfortably to my head. In my previous experience with similar products, I would feel slight itchiness on my head when using it and made me uncomfortable. However, this was not the case for this product.

Another thing I noticed is that the ball is quite soft (especially the novice ball). This means that not only is it possible to hit the ball with your bare knuckles, but also it wouldn’t hurt at all if it lands on your face.

For reference, the hardness of the ball can be approximated by the palm of your hand:

To illustrate how you might use it to gradually improve your skills on it, I’ve come up with a routine you could incorporate in your training.

How should I train with it?

Here, I assume you have never used a reflex ball before. If that’s the case, I would suggest to start here. For now, stick to the novice ball (the yellow ball). 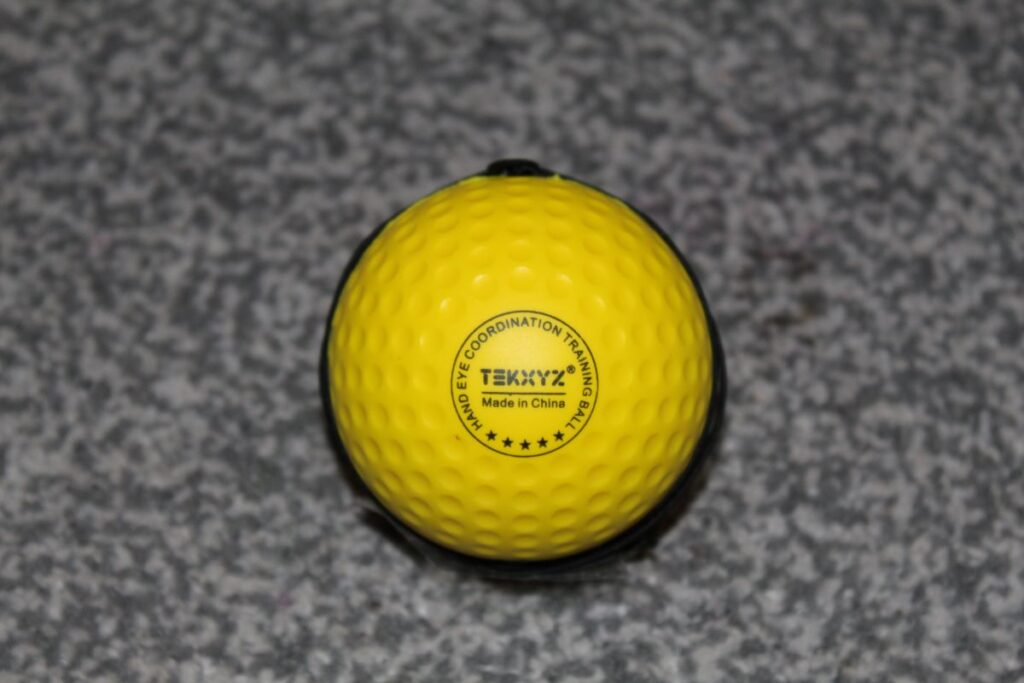 If you want to casually train with it as part of a warm-up of your boxing training or if you’re not pressed for time to improve your skills on it, I would suggest the following:

If you’re really dedicated to boxing or if you want to see improvements in a shorter period of time, then:

Once you get used to it, you might be asking: when can I transition to harder balls?

There is no simple answer to this as it depends on the skill level and comfortability of using the ball for you. However, a good rule of thumb would be:

Being able to hit consistently 50 times without stopping

It’s important to look at the perspective of how other people see the product. I’ve looked briefly at some review on Amazon who bought it.

What I’ve noticed in all three people above, is that they say it is easy to start but tricky to master. This challenge made them consider it more as a fun activity rather than part of training—this is key to help you stick to training with it and promote growth.

Using it myself, I really agree with the fun aspect of the product! The unexpected difficulty in the simple act of trying to consistently hit the ball makes it addictive to the point of wanting to continue training with it to see the results.

Any Good and Bad?

Pros and Cons of the Product

As the good things about it has been already explained previously, I want to focus instead about its downsides.

Most of the downsides come from the elastic string itself. What I noticed the most when I was using it is that after prolonged use, the string tangles itself in one direction. This can be annoying. Fortunately, it is easy to untangle it as it only gets twisted in one direction. 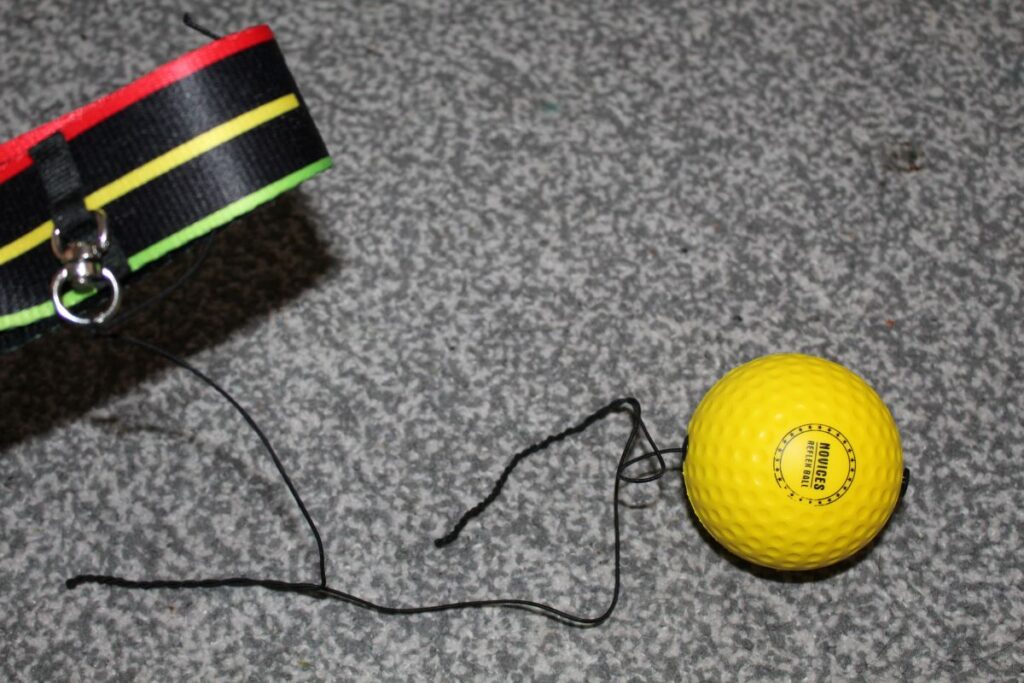 Another disadvantage is that it is hard to pass the string through the hole in the ball when changing the elastic for the ball. This mostly comes from the surface within it being rough and the elastic being flexible.

One way to overcome this would be to use a thin, hard piece of object such as the pen component of a ball point pen as you see below. You definitely don’t want to stick something too big so don’t stick your junk in crazy 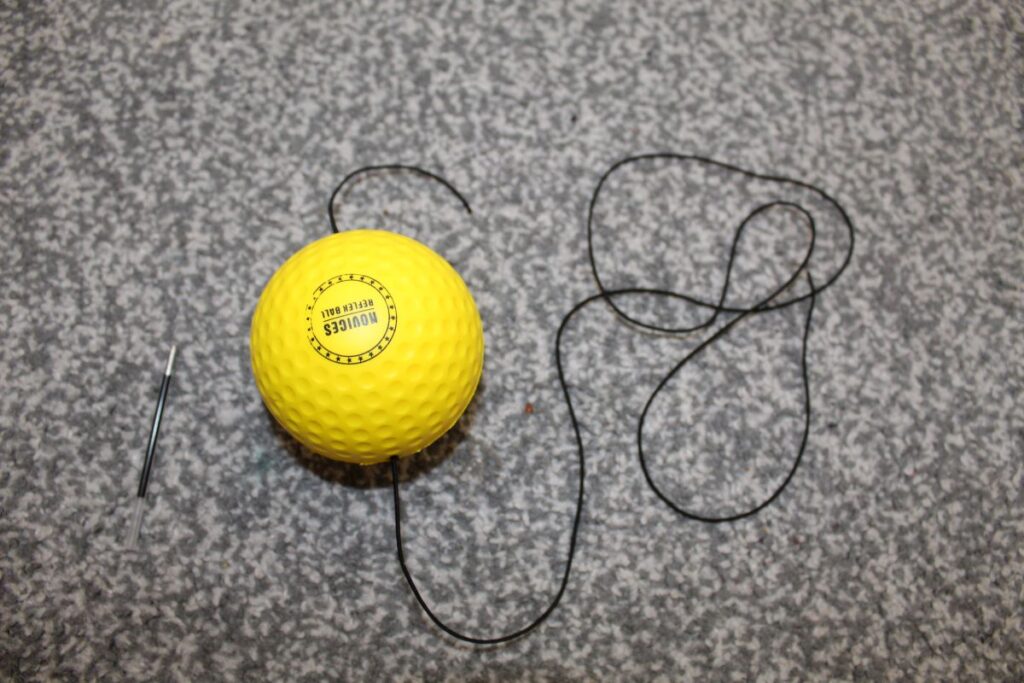 Lastly, another downside is that the string can be tedious to tie. This is because it is necessary to tie the string every time on both ends and could loosen up over time. It would have been better if some detachable mechanism was used, such as a hook.

Overall, the product comes with some downsides, especially when it comes to the elastic such as the tendency for it to tangle and being tedious to tie. However, the good things about it far outweigh the downsides—it is cheap, beginner friendly, the ball is soft, and so on.

However, the most important question I ask when using such type of product is: does it do the job to improve my boxing?

This is a definite yes for me—there are three balls with varying difficulty that allows me to gradually improve my skills on it. Also, I’ve seen decent results from it being transferred to sparring by allowing me to land more accurate, quick jabs.

I also think that it’s quite fun to practice with it and even a great tool to share the joy with your family members or friends!

My final verdict is 4.5/5. Works great and quite cheap. A great asset for your boxing journey!

Check Out in Amazon

As per our affiliate disclosure policy stated in our about us page, we want to notify you that the above links are affiliate links. These links provide us a small commission upon qualifying purchases to ensure the smooth operation and maintenance of our website.

We believe that transparency and integrity are important especially when it comes to publishing content about boxing online. So, to fulfill these criteria, we have disclosed this here. We’d suggest reading our affiliate disclosure policy and product review policy at our about us page!