Flinching, closing their eyes, or withdrawing their head during boxing bouts or sparring are problems that many beginners (and even some veterans!) face at the start of their boxing journey. In this article, we will explore with you how to stop flinching.

And you wondered how to not flinch in your boxing.

Similar to any other problem, one of the best ways of fixing them is to understand the problem. For that reason, let’s explore the roots and mechanics of flinching and the actual dangers associated with that action.

We’ll go over 7 different methods on how to stop flinching. This is mainly for boxing, but it could potentially apply to other similar sports like Muay Thai and MMA.

So, let’s not wait and get started!

What Does Flinching Mean?

Flinching, especially in the context of boxing and other martial arts, is the act of closing your eyes and pulling your head back subconsciously when provoked with an anticipated blow. 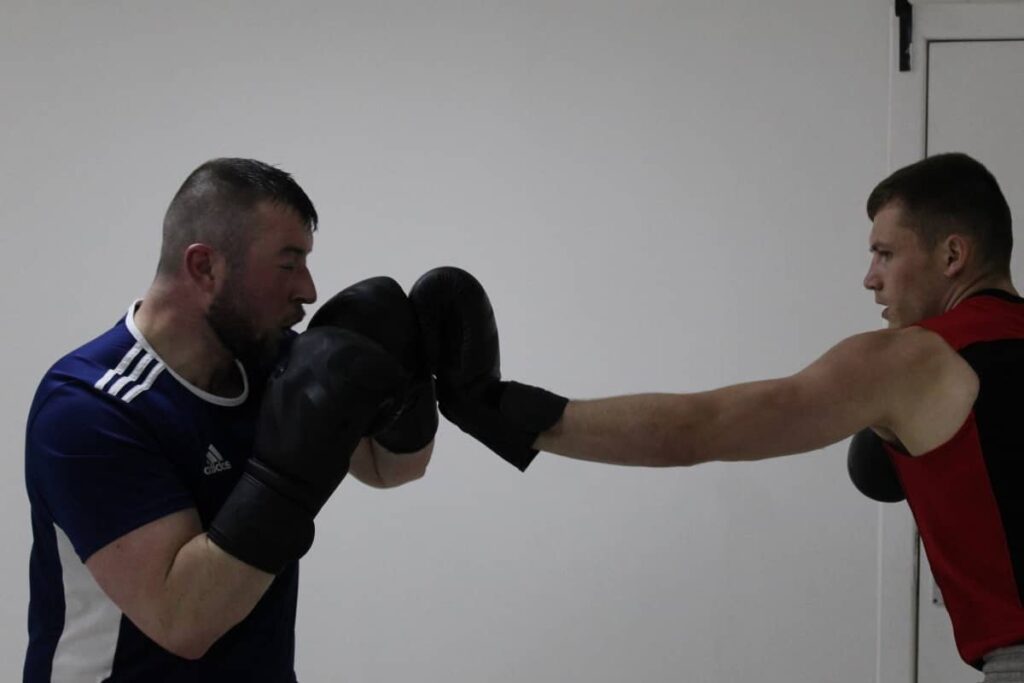 Despite we’re implying flinching is bad, it is a necessary biological reaction to protect us from potential harm. It’s an evolutionary trait that our body subconsciously uses to avoid or minimize potential incoming damage from projectiles or physical forces.

However, in the context of boxing, it is something that must be unlearned as it does more bad than good.

Particularly, the biggest risk of flinching is that you can’t see what is happening around you. When that happens during the fight, the danger of it is clear: not being able to see your environment and most importantly your opponent, can lead you to be brutally knocked out or suffer a big injury.

Another reason is that it reduces your time to counter: boxing is a sport where even a milli-second could be the difference between raising that trophy from the tournament or lying on the canvas face down. Flinching constantly means you’re giving more time to your opponent to attack and reduce the time you have to defend or return with a counter of your own.

The other potentially less known danger, but very well explained by Mike Tyson, is that punches that cause the worse knockouts are not the power punches, but rather the ones you can’t see it coming.

Remember: when you see a punch coming, even if you do not manage to catch it or defend it, your body, brain, and head are somewhat ready to receive the blow. Your body sees the danger and you naturally tense to somewhat absorb the punch. 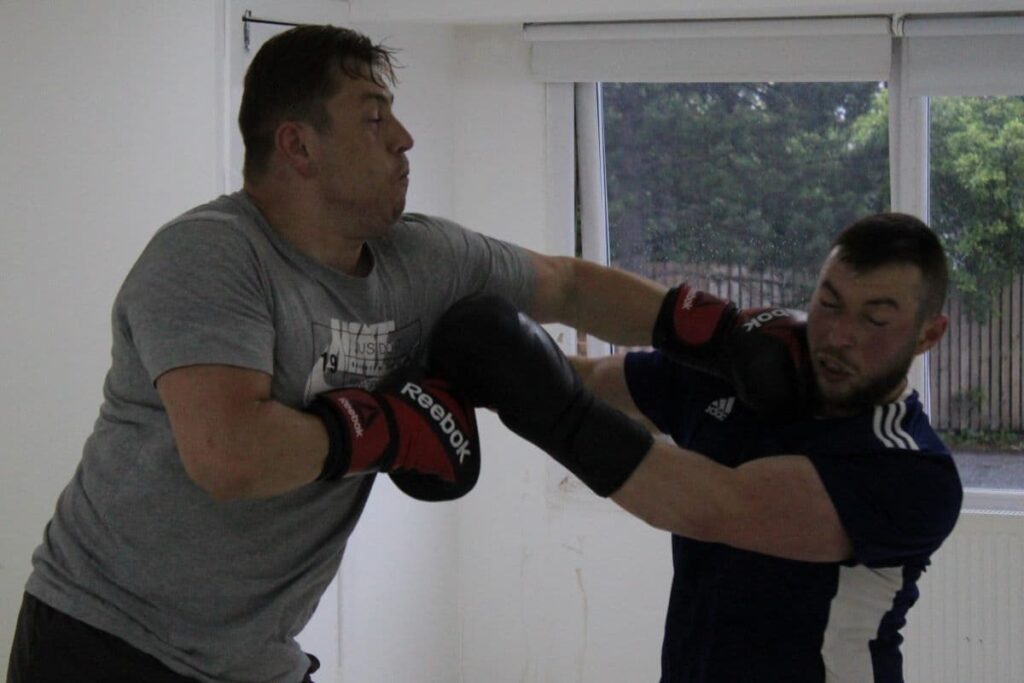 But when you can’t see the punch, there is no natural reaction of absorption and you’re simply getting knocked out cold. When you don’t see a threat, then your jaw, teeth, head, and neck doesn’t naturally tense up and the damage is usually a lot higher.

As a real-life example, look at all the sucker punches roaming around the internet. Despite the terrible form that’s detrimental to the strength of a punch, it ends up brutally knocking out the person.

That’s because the person getting hit doesn’t see it coming or expect it. That same might happen when you flinch!

Now, you know why you should keep flinching to the minimum and why you should eliminate it if you want to seriously think about sparring or competing in boxing.

So, how can we reduce or eliminate this instinct? Fortunately, we’ll explore practical ways and tips for how to stop flinching.

Tip #1: Understand that you need time

This practical advice is simple and quite unconvincing, yet many boxing beginners don’t understand it truly. Understand that unlearning flinching and eradicating the fear of getting hit takes time.

Some people associate flinching with fear and you might worry that your fellow boxing friends laughing at you when flinching. This is a negative cycle as that puts extra stress and pressure on yourself and in turn, may make you flinch more.

To not flinch, you must stay relaxed.

During competition or sparring, take a deep breath to stay relaxed and understand that you need time. This will ensure smooth progress to make you stop flinching gradually.

Human beings are intelligent creatures and have the unbelievable power to understand. To box well, you need to understand the sport of boxing well.

The same goes for flinching.

If you want to know how to stop flinching, it is key to firstly be consciously aware that flinching is useless. Regardless if you close your eyes or not, the punch will hurt you the same. This is especially important in the heat of the moment during sparring or competition.

The speed or power of the punch is not dependent on your eyes being open. When we are flinching, we somewhat subconsciously try to hide from the punch. Realising that flinching doesn’t change the way it feels at all, is the first step to eradicating it.

The next key realization is that you can endure way more pain than you think. So, worrying about the pain and the damage is pointless.

The trick, especially when you just started boxing, is to tell yourself that whatever happens you are going to get hit right before you start your sparring or competition match.

When you realise that flinching becomes pointless and unnecessary because you already accepted that it will happen.

Mental tricks are useful! But we understand that they work for some, but not all.

So next, we’ll explore some actual exercises.

Water splashing is an old-school exercise in Polish boxing introduced to young and new boxers with flinching problems.

In this exercise, your coach or training partner splashes water on your face. The aim of the exercise is then not to flinch nor close your eyes.

Alternatively, you can do an equivalent exercise where you get a partner with boxing gloves on to feint and throw very light punches on your face all while you stand perfectly still without flinching.

These exercises are not as easy as it sounds!

But with time, you start to unlearn flinching and eradicate the fear reaction.

These are very good, effective, and simple exercises on how to stop flinching. The former will constantly make your face wet, but also emulate the sweat from your opponent’s punches which could cause more flinching. However, cleanup may be more of a hassle. The latter can be won’t need any cleanup, however, but it doesn’t have any extra elements.

One question would be how many of these workouts do I have to do for this type of exercise? Well, this is up to debate, but it should not be considered as the main workout but rather done as a side exercise or a warm-up. Five to ten minutes of the exercise two or three times per week should be enough

A reflex ball is another great tool that will allow you to eradicate flinching. Training with the reflex ball helps you with many things! It improves your hand-eye coordination, timing, and rhythm, and also helps to overcome the flinch reflex.

The reason why the reflex ball allows you to eradicate flinching is simple: you are constantly exposed to a ball coming back at your face. 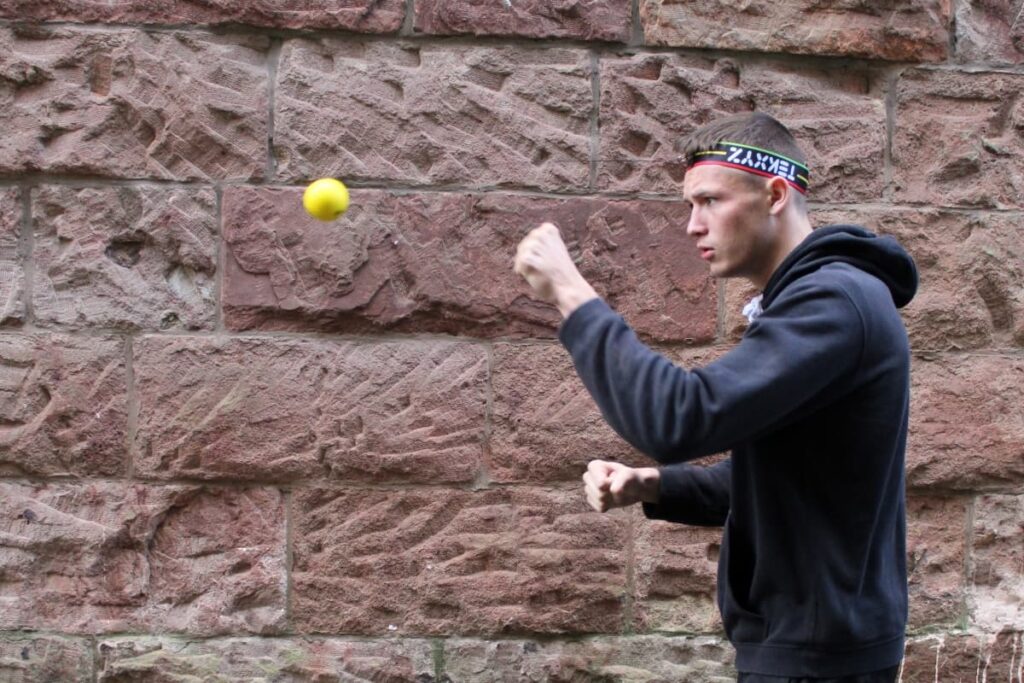 The way the reflex ball works is literally by hitting you back if you don’t hit it. Putting yourself into stimuli where something is hitting you is the best way to unlearn flinching.

Like the previous exercise, this can be a side workout or a warm-up before your real training. As such, two or three times per week should be enough.

If you want a recommendation for a reflex, we have written a review about TEKYZ Reflex Ball, which can be found on Amazon.

Another good exercise on how to stop flinching is to practice exchanges in boxing, especially in defence.

As an example, here is a demonstration with one of our clients.

This exercise is designed for you to get used to hitting and but most importantly, getting hit.

It helps with stopping the flinching reaction and is not as damaging as sparring. You are getting hit but in a slower way and a more controlled environment. This allows you to get used to getting hit.

Once you do not flinch at slower punches, start increasing the speed and power.

This exercise can easily be incorporated as part of your boxing focus pad workout and could be an alternative to the workout if focus pads are not available.

Pool noodles are the plastic sponge tubes you might remember when you were blowing air to produce bubbles in a swimming pool as a child. This equipment is used in boxing and incorporated as part of boxing training even at the highest level.

Pool noodle training is an exercise that can help you stop flinching in boxing. Similarly to the previous exercise, training with pool noodles also requires a partner or a coach.

Here’s what training with pool noodles looks like with Canelo.

As seen above, the point of the exercise is to avoid the punches and not get hit.

Unlike a focus mitts workout, the whip-like motion of the pool noodles makes it harder to defend against it and makes you likely to get hit.

While getting hit by the pool noodles won’t hurt, its whip-like motion is enough to engage the flinch reflex. The result is that you get used to getting hit and therefore helps you stop flinching.

All the previous tips and exercises help to an extent with getting rid of the flinching reflex, but by far the greatest way how to stop flinching is to do a lot of sparring.

The truth is, nothing helps with flinching (and everything else in boxing) as much as sparring and actual boxing do. This relates to the first tip—giving yourself time.

Sparring and boxing are the ultimate tests and the ultimate exercises that make you learn, develop, and grow as a boxer. Sparring will quickly eradicate your flinching as every time you will lose your opponent from your sight, you will be punished for it!

Nowadays many coaches wouldn’t recommend sparring too much.

You want to minimise the damage you receive throughout your boxing training and sparring is nearly always equal to some damage.

Sparring is indeed a very rough way to learn, but also quick and arguably one of the most effective training methods in boxing. All other exercises stimulate being punched. But sparring is equal to being punched.

Flinching is a normal reaction and a part of the learning process in boxing. Today’s guide uncovered a few of the mental tricks and boxing exercises that you can do on how to stop flinching.

You are left with many options!

All of the exercises work and it is up to you which one to choose. Make sure to add your own, additional exercises in the comments and let us know what works best for you. Good luck and do not worry about flinching too much.

The most important way to fix it is to exercise and give yourself time.

As per our affiliate disclosure policy stated in our about us page, we want to notify you that the above links are affiliate links. These links provide us a small commission upon qualifying purchases to ensure the smooth operation and maintenance of our website.

We believe that transparency and integrity are important especially when it comes to publishing content about boxing online. So, to fulfill these criteria, we have disclosed this here. We’d suggest reading our affiliate disclosure policy and product review policy at our about us page!